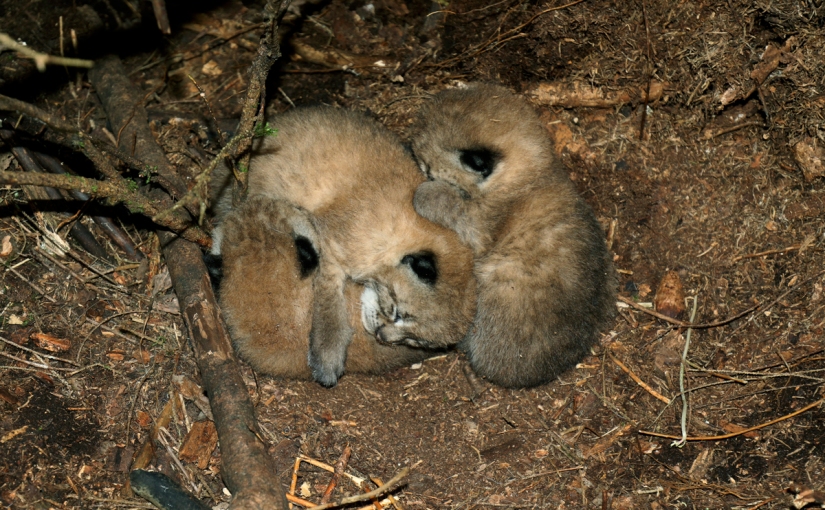 Denning and raising of kittens in Eurasian lynxes has only been studied thoroughly in rocky regions of Europe. In these regions, the importance of closed structures for lynx denning has been demonstrated. Nearly all natal dens and the majority of all maternal dens in these regions are situated in rocky sites: in rock cavities or among boulders. In contrast to that, very little is known about lynx denning in non-rocky forests of the Eurasian temperate forest zone. There is a common belief among zoologists and lynx specialists that denning and even parturition in non-rocky forests only takes place in treefall. This belief is based on a few finds of kittens in treefall or forest plots with treefall. So, actually the evidence for this is still quite anecdotal but has quickly been generalized in literature. However, we have evidence that denning and/or parturition in treefall is not always the common rule in the forests of Belarus, and that lynx denning and kitten raising is very complex and dependent on several factors, of which the most important are protection from the weather (first of all rainfall), mosquitoes and the presence and densities of other predators.

Over 20 years of searching for wolf dens in April-June in Belarus have resulted in the discovery of over one thousand wolf dens in treefall (mostly dens without pups and former dens of the year; 72 dens with pups). In sharp contrast to that, only a few lynx dens where found in treefall (easily recognizable by the presence of lynx hair), despite the fact that the number of lynx litters was equal or even double compared to the number of wolf litters in some years. If lynxes would mainly give birth in treefall or dense thickets, markedly more lynx dens (at least, hundreds) or denning sites (mostly former ones) should have been found.

Treefall and thickets offer new born kittens little protection from mosquitoes, heavy rainfall and other predators such as wolves and red foxes. Only when  the lynx kittens are older, large and dense tree fall offers the kittens the chance to escape from other predators. So, parturition and raising of kittens in their first days might take place somewhere else, in sites that offer better protection against these negative factors. Between 1997 and 2017, we gradually collected evidence that lynxes in Belarus often used burrows to give birth and raise kits: former wolf burrows, abandoned badger setts and abandoned beaver burrow networks.

The following information on denning of lynxes in Belarus, gained by ourselves between 1997 and 2017 (by track inspection and/or camera trapping), supports this presumption:

However, burrows, and sometimes treefall, are not the only denning sites of lynxes in Belarus. In order to learn more about denning behaviour of lynxes in Belarus and to build effective hypotheses for ourselves, we questioned many people (hunters, wolf pup searchers etc.) but rarely received satisfying responses. The information we did learn from some respondents was nonetheless very interesting.
• Twice, respondents discovered lynx kittens under compressed logging remains in a huge pile, where kittens were well protected from all three negative factors (rainfall, mosquitoes and predators). According to their explanations, it looked like the mother lynx did not go into the pile of logging remains and just called the kittens to feed them outside with milk or meat.
• Twice, lynx kittens (small, but already seeing kittens, and bigger kittens of one month old, at least) were discovered in trees; more specifically, where one big spruce was fallen (inclined) on another big spruce. Kittens were found at a height of 5-7 meters on a kind of platform formed by the spruce branches. In such a place, the lynx kittens were again entirely protected from the three negative factors described above.
• One respondent found a lynx kitten in an old treefall that was densely overgrown with spruce thickets. The kitten was placed at a root plate of an uprooted big spruce.
• Another respondent found kittens under many spruce branches compressed on each other, where two big spruces were recently fallen by wind, and one crown laid on another one. This offered protection from raining and mosquitos as well.
• One former lynx den was seen in Ledum palustre shrub in a bog with suppressed pines on a distance of about 200 meters from the bog edge. In such a boggy place, there are usually few mosquitos because of the too acidic peat soil. Moreover, predators like red foxes, raccoon dogs and wolves rarely visit such prey-poor habitats.

One more record can be found in the book ‘Mammals of the Soviet Union’, Vol 2, Part 2, Carnivores, (Geptner & Sludskii, 1972), where the authors mentioned one lynx den that was found in the central part of Belarus in a kind of couch under a spruce with low hanging dense spruce branches.
Above we listed two main types of information: those that we gathered ourselves during our studies in the wild and some information gathered from respondents. We think that both are biased. Our findings were biased because we did many studies on badgers and were present at badger setts a lot. The information we gathered from respondents are biased because most of these lynx dens were found by people walking with a large dog in the forest. When dogs were barking at a burrow, the dog was taken away from the burrow. We never walked with any dogs in the forest during the denning season.
Anyway, despite of the mentioned possible information biases, when looking at all the cases of lynx denning found in Belarus, it becomes clear that shelter from the weather (mainly rainfall), mosquitoes and protection from other predators are the main drivers of lynx denning behaviour. We assume that lynxes prefer to use denning sites and sites to raise kittens that offer the best possible protection against all three negative factors.

It’s evident that lynxes sometimes face a trade-off between the three negative factors. Burrows (former wolf burrows, former badger setts and dry abandoned beaver burrow networks in elevated sandy banks of canals) provide the best shelter against rainfall and other extreme weather conditions and against mosquitoes. Treefall principally provides the least shelter against rainfall and mosquitoes, and is used by wolves (no doubt that wolves might kill lynx kittens if they have a chance) to den and raise their pups. However, burrows (especially badger setts and former wolf burrows) are well known and frequently visited by many predator species which may pose a threat to lynx kittens (badgers, wolves, foxes, raccoon dogs). So, it’s very likely that the use of these burrows by lynxes for parturition strongly depends of the density of other predators in the denning area.

Until recently, a lot of burrows (first of all badger setts) were vacant in our main study area in Naliboki Forest, due to a decline in badgers (Sidorovich & Rotenko 2017). Judging from our own findings and taking a possible searching bias into account, it still seems that burrows were the main denning sites of lynxes in Naliboki Forest. Unfortunately we only recently started focusing on lynx denning behaviour, when a lot of changes happened in the composition of the vertebrate community in Naliboki Forest.

One of the changes that presumably had the largest impact on lynx denning behaviour was the fast recovery of the badger population. By 2018, all badgers reached a high population density in Naliboki Forest and recolonized all their former setts and occupied almost all former wolf burrows, abandoned beaver burrow networks in sandy banks of canals and red fox earths. Under these conditions, pregnant female lynxes were facing a lack of well-sheltered refuges to give birth and raise kittens during their first days.

On the other hand, as described here, the majority of breeding wolves in 2018 emigrated from Naliboki Forest to give birth and raise pups. With the absence of denning wolves as an imminent threat to lynx kittens, adult female lynxes began denning in treefall and thickets markedly more than before.

In effect, in May and early June of 2018 we discovered three lynx dens in Naliboki Forest during 40 days of working:
• two dens under dense treefall with several layers of fallen trees, partly overgrown with young trees (thickets);
• one den in a boggy pine stand with dense Ledum palustre shrub and a small former clearcut with a lot of abandoned logs and log piles.