In the Eurasian temperate forest zone, lynxes will first of all specialise in roe deer, when this prey is common. In more northern, boreal regions where roe deer are scarce and hares (mainly mountain hare, to a lesser extent brown hare) are common, lynxes will specialise on hares. When both roe deer and hares, i.e. the ‘preferable’ prey species  get scarce, lynxes will consume a diversity of alternative species, but preferred species are still preyed upon. However, under these circumstances, lynxes living in the same area may have strikingly different diets. These individual diets reflect both an opportunistic foraging behaviour and an individual foraging specificity. When the populations of the preferred prey species recover, it takes a few years before lynxes return to their specialised feeding on roe deer and/or hares.

Before 2013, the roe deer population reached high densities in the Naliboki Forest (on average 398 roe deer/100km²). Under these conditions, lynxes were almost entirely specialised in feeding on roe deer (Sidorovich, 2016). Under these conditions of sufficient roe deer ‘supplies’, we analysed 127 scats in total in the area, where 5-8 lynxes lived: 53 from the cold season (CS) and 74 from the warm season (WS). In the warm season the frequency of occurrence (%FO) of roe deer amongst consumed prey was 96.3%, and in terms of biomass consumed (%BC) the portion of roe deer was 81.2%. In the cold season the frequency of occurrence of roe deer amongst prey was 89.0% and 83.5% in terms of consumed biomass.

In those years, while snowtracking lynxes in Naliboki Forest, we found that in winter an adult male lynx killed on average about one roe deer  every six days, whereas an adult female with two kittens killed one roe deer every four to five days.

An extended period with deep snow in late winter and early spring  in 2013 caused a crash of the roe deer population in Naliboki Forest: in the winter of 2013-2014 there were only 29 roe deer censused per 100 km2 (Sidorovich, 2016). Here it is worthwhile to notice that Odden et al. (2006) mention that lynxes in south-eastern Norway were still specialised on roe deer, when they had a population density of 30 per 100 km².

Since 2013 we noticed differences in individual feeding patterns of lynxes. From November 2013 until mid-December 2017 (in conditions of low roe deer density: on average 0.2-1.3 inds/1km²) we learnt the following examples from individual lynx diet analysis:

adult female (Marysja) with one kitten (69 scats in CS): still specialised in feeding on roe deer (71%BC), other prey were hazel grouse and other small birds (11%BC), red squirrel (6%), small rodents (5%BC), mountain hare (4%BC), raccoon dog (2%BC) and red fox (1%BC); this family lived in the core area of Kazimir, was faced with the same prey abundance and availability, but had a clearly distinctive diet;

Thus, we may characterize the feeding pattern of the model lynxes. Kazimir was a generalist predator on mammals, mainly on medium-sized mammals as beaver, wild boar, red deer, roe deer and raccoon dogs. Marysja was still specialised in feeding on roe deer, but she stayed in Kazimir’s core area, where he was a generalist on mammals. Hanna was a generalist predator on a high diversity of mammals and birds, but she also stayed in Kazimir’s core area. Hanna mainly lived at the spots where Marysja stayed a year before (and where Marysja fed on roe deer, mainly). The roe deer number did not decrease, but Hanna relied on them markedly less and consumed a high diversity of prey species: mammals and birds of various sizes. Jadz’viha was a mammal eater, and nearly specialised in predating roe deer. S’tsiapan demonstrated a diversified predator diet consisting mainly of red deer and birds (mostly mallards and grouses). The same may be said about Bazyl’.

Since the autumn of 2017 the roe deer population has almost recovered (about 2-4 inds per 1 km2 on average) after the crash during the early spring of 2013. Nevertheless, by studying their diets we see that lynxes still haven’t made the switch to being specialised roe deer predators. If we pool all scats since the autumn of 2017 from the different lynxes (59 scats were roughly analyzed) we see that nearly half of them (actually 28) contained roe deer and red deer remains only. We think it will still take a few years before lynxes return to their specialised feeding on roe deer. 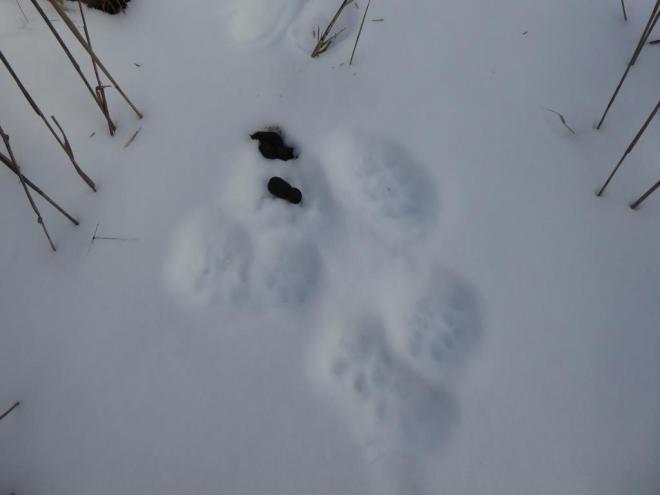