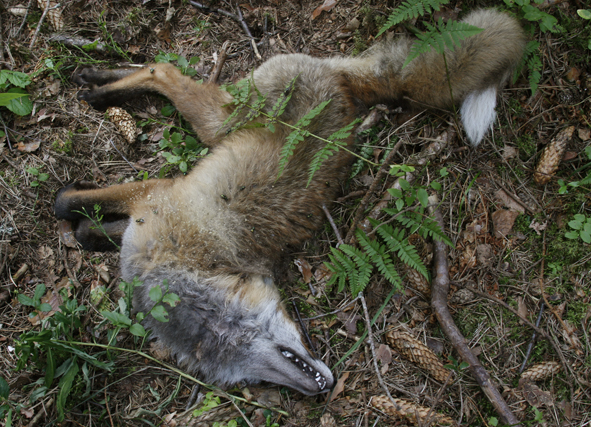 Below we consider the combined impact of lynxes and wolves  on the populations of red foxes and raccoon dogs, because their predation effects on the populations of the victim species are hard to separate. First, we list the gained data on the killing rate of red foxes and raccoon dogs by lynxes and wolves from two main different methods i.e. telemetry and snowtracking.

Wolf and lynx killing rates of foxes and raccoon dogs

Similarly, by averaging snowtracking data on wolves (about 2200 km of wolf trails were tracked in 1990-2008), we calculated that a wolf killed one red fox per 28 days and one raccoon dog per 19 days. During a year a wolf killed on average 13 red foxes and 19 raccoon dogs. Only 15.2% of red foxes killed (n=33) and 22.7% of raccoon dogs killed (n=66) were at least partly eaten by the wolves. So, wolves eat killed carnivores less frequently than lynxes. The following example illustrates that: a wolf pack of four individuals snowtracked in the beginning of December killed three red foxes and two raccoon dogs during approximately five days, and only one of the raccoon dogs was eaten half. Only one out of 53 scats of the wolves collected on their trails contained raccoon dog hair.

So, what impacts does this have on the populations of the red fox and the raccoon dog? Red foxes are known to be very resilient to high mortality rates. For example,  Hewson (1986) found that killing of foxes by humans in winter did not lead to fewer breeding dens the following spring, and it has been demonstrated that fox populations under pressure of artificial density reduction can compensate their losses, for example by increasing their litter size (Marlow et al., 2016). The raccoon dog is characterized by a high breeding rate (e.g. Kauhala, 1996; Sidorovich, 2011). Are the losses large enough to cause a decline in their densities? Which factors are at play? These questions are almost impossible to answer in all their details without a long-term and detailed study with a high budget. Nevertheless, we succeeded to collect interesting data that shed light on the topic.

Lynx numbers have increased from 5-15 in the whole forest in the early 2000’s to at least 80 nowadays. Over the years 1999-2014, the number of wolf packs varied between 6 and 14, and the number of wolves between 27 and 70. However, since lynxes reached high densities, wolf numbers have become very variable within the year, as a result of the killing of wolves by lynxes and the subsequent immigration and emigration of wolves (more details in ‘Interference competition between lynx and wolf’). Fox numbers have decreased 10-20 fold in 2014-2018 compared to the 2000’s, when there were 50-70 foxes per 100 km².

Nowadays, having 5-8 individuals of wolves and lynxes in total per 100 km² of the forest,  red foxes got  indeed rare during mid winter – only one individual per 10-20 km² on average.

To look at the impact that lynxes and wolves have on foxes by killing red foxes, it is worthwhile to compare the data on breeding of red foxes in Naliboki Forest in the first decade of the 2000’s and nowadays. In the springs of 2017 and 2018 we faced with really few red fox denning in Naliboki forest. This was the result of a  low number of potential red fox-breeders during early spring due to the losses caused by large carnivores in winter, and then because lynxes and wolves kill vixens during the period of denning and raising of small kittens and pups. Particularly wolves specialize in killing of vixens in their denning area. Parent wolves kill or drive all vixens away from their denning area of about 10-20 km2. We did not face with any exceptions on this rule during our long-term experience with wolf denning behaviour (Sidorovich and Rotenko, 2018). Usually wolf breeders kill vixens at their denning earths. One of them is digging in the red fox earth, while the other one is lying in an ambuscade in close proximity. This deep digging into the burrow greatly disturbs the vixen, and finally it tries to escape. The wolf waiting in ambuscade overtakes the escaping fox and kills it. Usually the carcass of the vixen can be found 30-100 meters from the destroyed burrow. Killing of raccoon dogs by wolves during the denning period at their dens in a similar manner as in the case of the red fox is not so common. Lynxes on the other hand, deliberately hunt and kill all possible raccoon dog cubs, as well as red fox cubs at their earths and young, dispersing red foxes.

Here it is worthwhile to notice that, based on extensive camera-trapping, during the last two winters there were relatively few cases of mange disease among red foxes; so, the decline in red foxes was not caused by the mange disease. Moreover, during the last two winters red foxes were registered by camera-traps about 120 times more often just outside of Naliboki Forest than inside. So, this means that there is a crucial impact on red foxes inside Naliboki Forest; and that may be just predation by lynxes and wolves. First of all, lynxes could be responsible for the decline in red foxes,  because during the last years (2016-2018) lynxes got more common in Naliboki Forest than wolves, and lynxes were registered as more frequent fox killers than wolves.

Snow tracking foxes in the winter 2016-2017 revealed pronounced lynx avoidance behaviour in foxes. Of the remaining foxes of the Naliboki Forest, 80 % live almost exclusively in grassy openings. Trails left by individual foxes during several days showed they hardly ever go inside the surrounding forest habitats. This behaviour is unprecedented in the Naliboki Forest. In the 2000’s foxes were common in all forest habitats and foxes that went hunting in grassy openings used the neighbouring forest habitats a lot as well.

Investigation of the red fox distribution by track registrations in Naliboki Forest in the winters of 2016-2018 revealed pronounced lynx avoidance behaviour of red foxes. Of the remaining foxes of the Naliboki Forest, most of them (84%, n=96) lived almost exclusively in grassy openings. Trails left by individual foxes after several days showed they hardly ever go inside the surrounding forest habitats. For instance, in November 2016, the majority of the trails left by two red foxes during three days in the Pawdniovaje Wyunishcha locality werein the open grassland, with few visits in the neighbouring forest habitats. By crossing the place of their stay we counted 241 and 168 trails in the opening with only 3 and 7 trails entering the forest habitats. This behaviour is unprecedented in the Naliboki Forest. In the 2000’s foxes were common in all forest habitats and foxes that went hunting in grassy openings used the neighbouring forest habitats a lot as well (see Sidorovich, 2016 for the details). Red foxes stay in openings because lynxes usually do not venture themselves to walk in open areas , where they are vulnerable against possible wolf attacks.

From the above data it becomes evident that more young red foxes are being killed by lynxes and wolves than they died from other mortality causes. Actually, at least, double more red fox cubs died due to predation by lynxes and wolves. Killing of vixen leads to the death of their cubs. Also, the data suggests that it is hard for lynxes and in particular for wolves to kill older, more experienced red foxes.

So, in 2016-2018 in Naliboki Forest wolves  and particularly lynxes clearly had a strong impact on red fox populations, but how about other area’s? Let’s have a look at long term data on red fox, wolf  and lynx densities (given as multiannual mean) in several (predominantly forested) study areas in Belarus with different habitat carrying capacity:

The above examples suggest that the impact of lynxes and wolves on red fox population densities heavily depends on habitat carrying capacity. In the Lovat terrain with the ecologically rich forests interspersed with a lot of rough grasslands, all these species (lynxes, wolves and red foxes) reached quite high densities in the 1990’s. But if we look at the Krasny Bor terrain with medium habitat carrying capacity, we notice the same pattern as we observed in the Naliboki forest: red fox numbers in a drastic decline, when lynxes reach high densities, resulting in unsaturated red fox populations. Even in the Palata terrain with very low habitat carrying capacity in pine forest on barren sandy soil and with  few lynxes and wolves, red fox density was still higher.

Concerning the impact of wolves and lynxes on raccoon dog populations, it is going on a markedly different way. Raccoon dogs are medium-sized predators with a very high fertility rate. When raccoon dogs are numerous and their populations arte in a healthy state, killing of them by large predators has very little to no effect on their densities. Moreover, raccoon dogs are less vulnerable from predator attacks than red foxes in winter, because they spend a lot of time sleeping in burrows or in other kinds of safe refuges.

However, there is another factor at play. Raccoon dogs in Belarus are characterized by a population cycle of about 40-years due to infestations of the trematode Alaria alata and mange (see Rotenko & Sidorovich 2017 for more information on the raccoon dog population cycle).

When raccoon dogs are in decline and reach their cyclical low, lynxes and wolves (when occurring in moderate to high densities) seem to be able to exacerbate their decline and keep their numbers at a low level for a longer period.

In Naliboki Forest raccoon dogs reached a cyclical low in the early 2010’s. In 2013 an event took place which has probably exacerbated the impact of lynx and wolf on raccoon dogs even more. Due to a  crash in roe deer and wild boar numbers, both lynxes and wolves had to switch to alternative prey. Shortly after the crash, lynxes and wolves started to increase their predation on raccoon dogs. An initial period of adaption to lower numbers in roe deer caused wolves to predate on a lot of unusual prey such as red foxes and raccoon dogs, but after a few months they adapted to the new situation by starting to predate larger ungulates such as red deer and elk (Sidorovich et al., 2017). Since 2016, lynx numbers in Naliboki Forest increased a lot, up to 4-5 individuals per 100 km2, and there were still quite many wolves, especially in mid-winter. So, again the killing rate of raccoon dogs by the large carnivores was excessive, suppressing the species population at a low density. In this unfavourable situation the last raccoon dogs survive within highly heterogeneous swamps and inundated habitats (87%, n=79) such as abandoned peatories or large  inundations by beavers along a canal network within spruce and black alder forest with a lot of treefall and dead standing treesas well as other rough swamped forests.

So, when raccoon dogs are in decline and reach their cyclical low, the combined effect of predation by both lynxes and wolves (when occurring in moderate to high densities) exacerbates their decline and keeps their numbers at a low level for a longer period. This in turn impacts shared prey such a Black Grouse and Capercaillie.  The decline in Tetraonids (mostly black grouse and capercaillie) in Belarus can be attributed largely to predation by the non-native and invasive raccoon dog, because raccoon dogs can reach very high densities and they are more effective than foxes to hunt hens with chicks because they hunt in pairs (Sidorovich 2011).