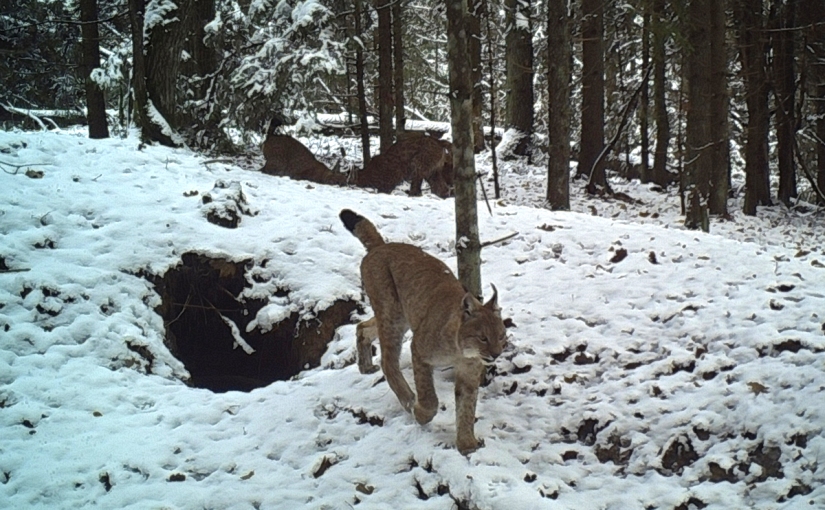 Lynxes are considered as strictly solitary carnivores. Social contacts between adults are believed to be limited to mating season. Yet there have been some records of (prolonged) social contact between adult lynxes outside mating season, mostly from snow tracking. During telemetry research in other countries, adults (mostly male-female) have been occasionally found in each other’s vicinity outside mating season. Because this is considered to be highly exceptional this does not receive much attention and the details of this behaviour remain unknown.

Combined snow tracking and intensive camera trapping provides us with more clues. Below some examples of sociality in lynxes, registered in the Naliboki Forest.

During the next months – while snow tracking them – we found out that they regularly hunted together. At the same time, the male tended to go alone for territorial marking faraway outside of the core area of their paired stay.

The same winter we found another male and female regularly walking together from mid-January until late April. The last registration of their joint trails was on the 22nd of April.

In the winter of 2017-2018 we registered two other cases, where an adult male regularly stayed (walked, hunted, groomed, slept etc.) with females in the period of November-February.

One case concerned a lynx pair that was registered by both manifold snow tracking and camera trapping (in November-December mainly).

One particularly interesting anecdote concerning the other case in the winter of 2017-2018 is that of an observation of another lynx pair by three participants of a wildlife trip, who spent a night in January on a watching platform in the forest. In the morning they saw two pairs of lynx eyes in the distance in their flashlights. By looking at the tracks in the sand in the morning, it became clear that the lynx pair passed right next to (under) the platform without being noticed. It wasn’t until the lynxes were further removed from the platform that they were noticed. Another interesting fact is that just two hours before they were approached by the lynx pair, wolf howling recordings were played from the platform. Was the lynx pair attracted by the wolf howling? Joint trails of this lynx couple were registered for three times from late January till mid-February.

From all these observations we start to think that, if an adult male lynx has an adult female without kittens (this may be even a subadult female) within its home range, it tends to join the female. This includes cooperative hunting, simultaneous consumption of kills, grooming and sleeping.. Such cooperative living of an adult male and a female may last months or at least the whole cold season. However, the long walks of adult males with a lot of territorial marking are mainly carried out alone. So, cooperative living of adult male and female lynxes mainly takes place in housing areas.

Another interesting aspect in social interactions between lynxes is that of subadults, their mother and the new kittens of the year. Lynx yearlings separate from their mother in spring, a gradual process which starts in mating season when they are left alone by the mother for several days (according to our registrations it may last up to 9 days), when she goes mating. After the mating season, yearlings often join their mother again for up to about one month, but towards the time of new parturition, they separate from the mother. Some yearlings disperse right away, others hang around in the vicinity of their natal home range for a while longer.

In the beginning of the winter 2016-2017 we photographed a female with her two kittens of the year together with a subadult, which was her kitten of the previous year. Later that winter, during snow tracking sessions, we also found their joint tracks, but not all the time. Often the subadult was walking alone. It stayed the whole winter in a very small area (approximately 10-15 km²), within the larger home range of the mother.

Since late summer and autumn 2017, we regularly registered the same female hunting together with a subadult (kitten of the previous year), while she left her two kittens of the year in a sheltered place. By camera-trapping and snowtracking we registered all three lynxes (the mother, her two kittens and one subadult) walking together at times in November-December 2017 and January-February 2018.

A few years earlier, in the winter of 2015-2016, we already registered the same female leaving her two kittens in tree fall as it went hunting with one subadult.

Generally, we think that during winter, mother lynxes tend to accept some of their kittens of the previous year (i.e. subadults), if they are still roaming within their home ranges. This behavioural feature leads to a higher survival in subadults, which is demographically essential, because mainly (inexperienced) subadults die from starvation when prey supply is abnormal (low densities of regular lynx prey). This high mortality of subadults can lead to a population decline, as described here.

An important question is how often such an ‘unusual’ (according to common beliefs) social contacts take place. For the moment our very preliminary rough estimates suggest that, at least, a quarter of adult males frequently stays with a female out of mating season; and a third of mothers accept subadults, i.e. 1-2 kittens of the previous year.