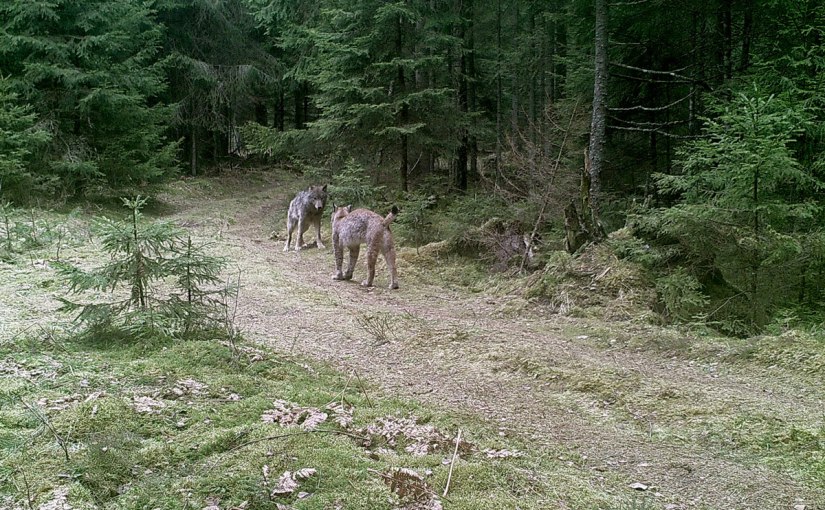 To study lynx-wolf interference through telemetry means having both wolves and lynxes (radio/GPS) collared in the same study area; as stated before this requires a huge effort and investment. If the result of such a study is that both species are overlapping in home-range and frequently using the same sites, what does this say about the relation between both species? Does this necessarily mean there is no interference competition between the two predators, as suggested by some researchers? We believe not.

By reading the available literature and talking to wolf and lynx researchers, it becomes evident that interference between the two species is actually poorly studied. Some mammalogists tend to assume that wolves suppress the lynx population. Some even suggest details of  aggressive behaviour of wolves towards lynxes: strong wolf-packs attack lynx family groups and kill kits during lynx mating season, when the kits stay alone or disperse. Seemingly, such stories are only speculative believes and ideas. We collected evidence that the opposite is actually true, at least in the dense forests of Belarus.

Many people find it hard to believe that lynxes can kill healthy wolves, let alone on a scale in which it has severe impact on the composition of wolf packs. After all, one lynx is no match for a wolf pack, right? Even a large adult male lynx would expose itself to  serious risk of being killed, if it tried to fight with a wolf pack. Indeed, a lynx will never attack a wolf pack.

However, wolves are not always in packs. They live in packs in the cold season (from late september until mid-April) and even then many wolves walk around alone. In the warm season (from mid-April until late September), wolves walking alone are more common then wolves living in small packs.

Just before denning and 10-20 days after parturition, the parent wolves are alone most of the time: the mother is at the den, the father forages. Female wolves in the last decades of pregnancy are clumsy, and when their males are foraging they are very vulnerable.

The majority of yearlings that are chased away from the new denning site by their parents walk alone, even if there are several of them.

Pups of the year are another category of vulnerable wolves. They stay alone from the age of 15-20 days until they start to move with the parents (i.e. from mid-May until mid-September). During these months, wolf pups can easily be killed by lynxes.

Moreover, we got convinced that an adult lynx – especially a big male – can win a fight from any lone wolf. We photo-documented a  fight  between a (not very big and quite old, i.e. older than eight years) male lynx and a (not small) adult male wolf. The lynx threw the wolf on its back,  attacking it’s vulnerable belly. The lynx won the fight, and we have good reasons to assume the wolf died from its injuries. Before the fight, we frequently photographed this easily recognisable wolf , a few hours after the fight, the visibly gravely wounded wolf was photographed one more last time.

So, it’s clear that lynxes have plenty of opportunities to kill wolves. In forests, lynxes are also less vulnerable to attacks of wolf packs because they can climb in trees and so escape from danger.

During many years of studying wolves and lynxes in Belarus and spending  vast amounts of time in the wild, only lynxes killed by lynxes (males killed by other males and kittens killed by males) were found. We never found any lynx (kittens or adult) killed by wolves.

In contrast, we found several wolf pups of various age and pregnant wolves killed by lynx.

Cases of wolves found dead (1995-2017); presence of lynx tracks, lynx hairs and lynx bite marks on the wolf carcasses proved they were killed by lynx:

Moreover, tracking and camera trapping provided us with further proof. We have registered lynxes systematically following wolves and inspecting freshly used wolf burrows and dens during wolf denning season to search for wolfpups.

Cases of wolves killed by lynx, found by camera trapping and tracking:

Body language and marking behaviour as indicators of interspecific relations

Below some examples of the responses of wolves to lynx odour, documented by camera traps:

By camera trapping important marking points of both lynx and wolf we found a consistent pattern. Wolves are usually interested in lynx marking points and inspect them with caution, while lynxes photographed at wolf marking points usually act indifferent and uninterested.

Since 1999, the wolf population of the Naliboki Forest has been thoroughly monitored and its reproduction biology meticulously studied (Sidorovich 2016, Sidorovich & Rotenko 2018).  Over the years 1999-2014, the number of wolf packs varied between 6 and 14, and the number of wolves between 27 and 70. Wolf population density in early winter varied from 0.9 to 2.5, with mean of 1.8/100 km². A total of 37 dens with pups and 92 denning plots with recent dens were discovered. Litter size in May ranged from 1 to 11, with a mean of 5,8. Before 2015 pup survival by the beginning of winter was on average 52%.

Sudden and dramatic changes in wolf numbers and pack composition were limited, and mostly related to killing of wolves by hunters. These changes generally occurred predictably during and shortly after wolf hunting season in late winter (February-March). After 2010, wolf hunting was limited or restricted in a part of the Naliboki Forest. Despite the (irregular) killing of wolves by hunters, there has been a fairly high stability in the wolf population for many years.

In recent years lynx numbers have increased markedly in the Naliboki Forest: from 22 in 2013-2014 to at least 60 in 2016-2017 (part of the forest wasn’t censused in detail in this winter). At the same time, we start to notice three pronounced processes in the wolf population:

The phenomenon of large-scale immigrations might have happened  in the winter 2014-2015 already, but we weren’t able to record these changes in detail due to the weather conditions.

Low wolf numbers and instability in the packs at the beginning of winter allows vagrants to settle during wolf mating season, resulting in high wolf numbers by the end of winter.

As to emigration of wolves in April, we think that at least a part of the wolves that arrive in the forest in late winter – being confronted with high lynx densities – chooses to leave the forest again in search of safer denning areas with no or fewer lynxes. Those can be found in more rural landscapes where forest fragments are interspersed with open agricultural land.

As described above, we have registered many cases of wolves killed by lynxes, and not vice versa. In recent years, there has been a marked increase in lynx numbers and a total absence of any other significant changes that might effect wolf population dynamics (e.g. increased poaching, diseases,..).  So, evidently these recent  changes in wolf population dynamics are connected with lynx interference.

With the current high lynx densities, the Naliboki Forest acts as a reproduction pitfall for wolves. The wolf population persists, not because of it’s reproduction, but due to immigration from adjacent rural areas with fewer lynxes.

The findings above demonstrate the complexity which has to be taken into account when considering the possible impact of lynxes on wolf populations. If one would only compare wolf numbers in mid winter over the years, no significant changes will be found. Taking reproduction, pup survival rate, pack composition, immigration and emigration into account reveals a completely different story…

The diversified Belarusian forests of today, particularly the Naliboki Forest, clearly favour lynxes over wolves. However we do not claim that lynxes are dominant over wolves in all circumstances. Other areas where both species live might favour wolves over lynxes.

In Belarus, the ecological conditions in large, continuous forests  were not always in favour of lynxes. From historical hunting archives, we know that in the 17th to the 19th century, both ungulates and lynxes were far less common in Belarus (at that time Great Lithuania). Wolves on the other hand, were common. The forests back then were a lot less disturbed and had a more primeval character. Intensification of logging in the 20th century lead to the appearance of clear cuts with reforestations, which markedly increased habitat carrying capacity for both ungulates and  lynxes. We hypothesize that logging in large continuous forests increases interference between lynxes and wolves, leading to a pitfall situation in wolf reproduction.

One thought on “Interference competition between lynx and wolf”