Between 1985 and 2010, lynx population dynamics were studied in relation to prey supply (abundance of hares, Tetraonids and roe deer) and lynx diet in Paazierrie Forest (northern Belarus).

Lynx scats were collected year round for dietary analysis. Diet was investigated for separate periods with different prey supply: 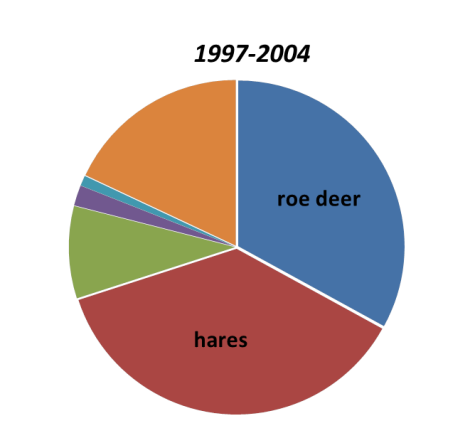 The data on lynx diet showed that roe deer are preferred over hares. Regardless of stability in the hare populations in 1985-2004, their share in consumed biomass in lynx diet dropped 1.4 times during the period of high roe deer density. At the same time the proportion of roe deer in prey biomass consumed by lynx increased 3.5 fold.

For the main study period (1985-2005) we found a clear effect of changing prey supply on kit mortality during winter. A growing supply of roe deer after 1997 drastically improved winter survival of kits, explaining the lynx population growth.

So, how the explain the drop in lynx numbers? We registered four cases of subadult lynxes starved to death. These second year lynxes are already separated from their mother and have to survive the winter alone for the first time. It seems that these inexperienced subadults were not able to hunt efficiently on alternative prey in winter. Perhaps this inability of subadult lynxes to hunt alternative prey caused an unusually high winter mortality. Because kit mortality remained low, this winter mortality of subadults might explain the lynx population decline in 2006-2010.